How Virginia Assesses Points on Your Driving Record

Speeding in Virginia? How many points is that?

All Virginia-licensed drivers and residents are subject to Virginia’s Uniform Demerit Point System. The Commonwealth’s demerit point system does not apply to out of state drivers. For example, a person, licensed in North Carolina, convicted of reckless driving eighty-eight (88) miles per hour in a sixty-five (65) mile-per-hour zone in Henrico County General District Court would be subject to North Carolina’s demerit point system, not Virginia’s. As a result, it is important for out-of-state drivers to contact their state’s department of motor vehicles to determine the applicable demerit points associated with their specific charge.

All Virginia drivers start with zero points on their driving records. Virginia licensed drivers receive one positive (+1) point for every year of good driving. In-state drivers may receive positive five (+5) points by voluntarily completing a defensive driving school. However, this can only be done once every two years. Five points are the maximum positive points permitted by law in the state. As a result, the best driver point balance in Virginia is +5 points. 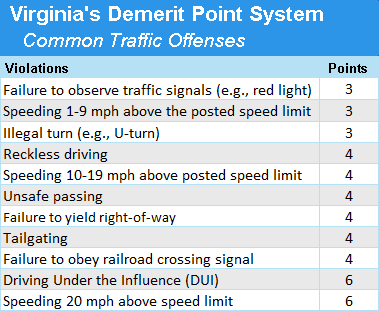 The best advice is to try to avoid being placed on probation. You should take even minor traffic infractions seriously because demerit points tend to sneak up on people. For example, a person with zero points who pays off three speeding tickets they received within the same year may be placed on probation. Experienced traffic attorneys, like the lawyers at The Weiland Firm, PLC, know how to advise their clients to avoid the accumulation of demerit points from reckless driving and speeding tickets in Virginia.